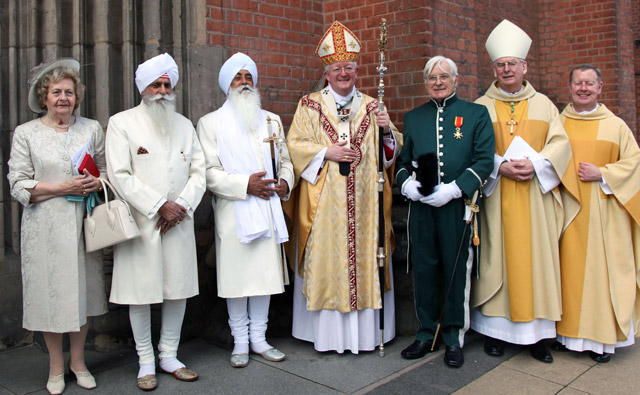 History was made in the Catholic Church during a special Mass and Investiture at Metropolitan Cathedral and Basilica of St Chad, Birmingham, of Bhai Sahib Bhai Dr Mohinder Singh Ahluwalia and Mr William Ozanne, as Knights of the Pontifical Order of Pope St Gregory the Great, on Sunday 22 April 2012.

The Most Reverend Bernard Longley, Archbishop of Birmingham, invested the internationally known and respected Spiritual Leader and Chairman of Guru Nanak Nishkam Sewak Jatha, based in the Handsworth area of Birmingham, with one of the highest Papal Awards.

The Order of St Gregory is normally bestowed on Catholics but in rare cases it is also conferred on non-Catholics in recognition of meritorious service to the Catholic Church and the exceptional example they have set in their communities and country.

More than 120 Sikhs, from Birmingham, London, Leeds, and some who had flown from Kenya and India were present in St Chad’s Cathedral for this unique and ground-breaking event in inter-faith relations involving the Catholic Church and the Sikh faith.

Mr Bill Ozanne, who has worked in the area of inter-religious dialogue locally, nationally and internationally for many years as a member of the Catholic Bishops’ Conference of England and Wales Committee for Other Faiths, has recently been appointed by Archbishop Longley as Chairman of the Archdiocese of Birmingham Commission for Interreligious Dialogue.

During the Rite of Investiture, which took place immediately after the homily, Bhai Sahib Bhai, was escorted by Sewa Singh Mandla, and Mr Bill Ozanne by his two sponsors, Michael Hodgetts, KSG and Tony Flanagan KSG.

Canon Gerry Breen, Dean of St Chad’s Cathedral, read out the two Papal Briefs of “Benedict XVI Supreme Pontiff”, given at St Peter’s in Rome, signed and sealed by the Cardinal Secretary of State, Cardinal Bertone.

In his homily Archbishop Bernard Longley said: “This is a truly joyful day for it witnesses a moment of recognition and gratitude on the part of the Catholic Church for the dedication of two men of faith for whom our city of Birmingham is their home and the base for their work. This is also a unique and historical moment in the life of this Cathedral and in the experience of the Catholic Church in England and Wales and perhaps further afield.

“It is very fitting that Bhai Sahib Bhai Dr Mohinder Singh Ahluwalia and Mr Bill Ozanne are receiving Papal Knighthoods from His Holiness Pope Benedict XVI on the same occasion and in the same ceremony of investiture. Over a friendship of many years they have discovered not only within each other, but also within the faith traditions that they represent, an openness to dialogue and a desire to deepen understanding and co-operation for the common good.

“They have both personally committed considerable time and energy to the goals of interfaith understanding and of common witness to shared values. But they have also encouraged and enabled the Sikh and Christian traditions to make progress along the pathway from mutual respect towards the deeper insights that friendship brings. They have prompted us to work more closely together in service of others.”

The Archbishop continued: “I believe that it is the first time that a Papal Honour has been bestowed in this way on a spiritual leader from within the Sikh community. It represents the Holy Father’s recognition of Bhai Sahib Bhai’s deeply held desire for fruitful and lasting relations between Sikhs and Catholics and opportunities to witness together.

“We recall Bhai Sahib Bhai’s presence in Assisi for the international meetings of faith leaders at the invitation of Blessed Pope John Paul II and of Pope Benedict – and I am sure that he will long remember being present with Mandla-ji in St Peter’s Square at the funeral of Blessed John Paul II during April 2005.”

Archbishop Bernard Longley stressed: “Nothing could have given greater pleasure to Mr Bill Ozanne than to be receiving this Papal Knighthood alongside Bhai Sahib Bhai, for this moment becomes symbolic of Bill’s own vision for interfaith dialogue and witnesses to his long commitment to this important work of the Church.”

He expressed his gratitude to Bill Ozanne for taking the Chair of the Archdiocese of Birmingham Commission for Interreligious Dialogue.

He said: “Bill Ozanne has constantly emphasised the abiding significance of the teaching of the Second Vatican Council in its Declaration Nostra Aetate. The insights of this declaration are as relevant to our situation today as when they were written fifty years ago. It is the foundation for our friendship and collaboration at every level with men and women of faith. We are blessed in this city to have an active and committed Faith Leaders Group and I am grateful that so many of its members are here with us today.”

Archbishop Bernard Longley concluded his homily: “The faith communities in this city are often among the first to recognise emerging social needs within our local communities. We want to develop effective partnerships among ourselves and with other agencies wherever appropriate to help meet these needs. May today’s celebration encourage us to continue along the pathway of this commitment not only for the good of our own faith communities but for the common good.”

St Chad’s Cathedral looked at its magnificent best and the Cathedral Choir, under its Director of Music, Professor David Saint, added to the splendour of an historic and memorable occasion with a wonderful rendering of the Franz Schubert Mass in G major. The great Pugin masterpiece was filled with echoes of joyful sound.

After the final hymn, “Christ is made the sure foundation”, members of the Sikh community sang a hymn of praise accompanied by two musicians playing traditional musical instruments. It was a deeply moving experience and in complete contrast to the ritual and ceremony of the Mass and Investiture.

Mr Sewa Singh Mandla then spoke on behalf of the Sikh community. At the lectern with the lighted 2012 Pascal Candle burning brightly beside him, he concluded: “Our two faiths respect each other. We pray that the relationship between us will grow and flourish.”