Archbishop Gallagher at UN: combating slavery is a priority 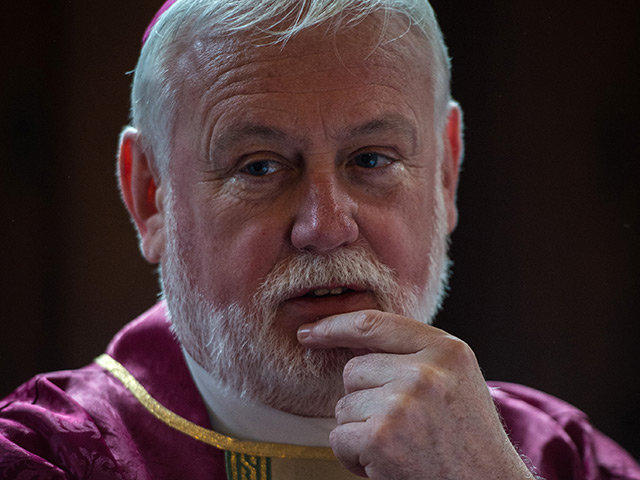 The Vatican has told a United Nations meeting in New York that the fight against forced labour, slavery and human trafficking is one of the defining priorities of Pope Francis’ papacy.

Speaking at a high level leaders event on Tuesday, the Holy See’s Secretary for Relations with States, Archbishop Paul Gallagher, said the Church has been speaking out against these abuses since the Second Vatican Council in the mid-1960s.

He outlined ways in which the Holy See and the local Church are working closely with the British government, in particular through the successful Santa Marta partnership with law enforcement authorities.

The Vatican foreign minister said that religious sisters, working in coordinated networks, have proved particularly effective in helping victims of trafficking and exploitation, providing them with safe havens and other forms of practical and spiritual assistance.

He said the declaration on implementation of a global Plan of Action, which will be adopted in the coming days, emphasizes the importance of strengthening collective action to end these heinous crimes. They can only be fully addressed, he said, by promoting effective juridical instruments, alongside concrete collaboration at multiple levels to punish the criminals and assist the tens of millions of victims.

The Holy See’s involvement in the fight against human trafficking and other forms of modern slavery is not new. Already in 1965, the Catholic Church strongly condemned as “infamies” slavery, prostitution, the selling of women and children, and disgraceful working conditions where people are treated as instruments of gain rather than free and responsible persons. These phenomena “poison human society, debase their perpetrators” and represent “a supreme dishonor to the Creator.”

The issue of trafficking in persons can only be fully addressed by promoting effective juridical instruments and concrete collaboration at multiple levels by all stakeholders, using multi-pronged strategies aimed to halt these heinous crimes, punish the criminals and assist victims.

Pope Francis has made it clear that working to end forced labour, modern slavery and trafficking in persons is one of the defining priorities of his papacy. In this way, the institutions and organizations of the Catholic Church act in partnerships and collaboration with both the public and private sectors, including with government authorities.

In particular, the Holy See and the Catholic Church collaborate with the British Government at various levels and in many initiatives in the effort to eradicate trafficking in persons. One such partnership is the Santa Marta Group, whose effectiveness lies in the close collaboration between law enforcement authorities and Church institutions, which rescue victims and accompany them in their rehabilitation to normal life. Experience has shown that many victims are wary of trusting law enforcement authorities, but that they confide their stories more easily to religious personnel, especially religious sisters, who can build their trust in the legal process and provide them safe haven and other forms of assistance.

Thus, faithful to their specific nature, Catholic institutions and organizations have been on the front line in helping the victims, especially women and girls, to escape from situations of slavery and, with loving concern, patiently walk with them on the long road back to a life of freedom, both interior and exterior. Women religious, in particular, have been central to this work that often takes place in situations dominated by violence. They form networks at multiple levels to coordinate their efforts and share best practices and resources, thus maximizing their impact.

The Political Declaration on the Implementation of the Global Plan of Action to Combat Trafficking in Persons, which will be adopted in the coming days, emphasizes “in the strongest terms possible the importance of strengthening collective action … to end trafficking in persons.” The global nature of the crimes of forced labour, modern slavery and human trafficking require from all of us a commensurate response of collaboration, fraternity and solidarity. We owe that response to the tens of millions of victims, who look to us with desperate hope for their emancipation and for a return to a life of dignity and freedom.

Thank you, Mme Prime Minister; thank you, Your Excellencies.