Mass of Thanksgiving for the Election of Pope Francis 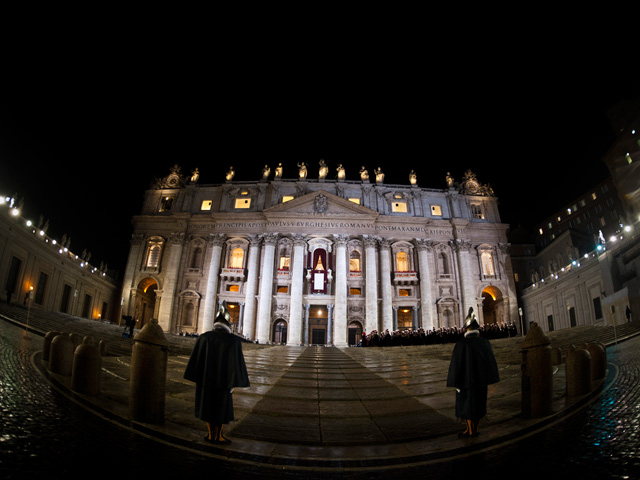 Vatican » » Mass of Thanksgiving for the Electi...

The Most Reverend Vincent Nichols, Archbishop of Westminster and President of the Catholic Bishops’ Conference of England and Wales, has celebrated a Solemn Mass of Thanksgiving for our new Holy Father, Pope Francis.

The Mass took place in Westminster Cathedral at 5.30pm on Thursday 14 March.

What great joy we all felt when, not long after 6pm yesterday evening, the white smoke swirled into the night air, ascending high above the huge crowd gathered in St. Peter’s Square. We have a new pope! We have a father! A time of waiting followed. Filled with a sense of excited expectation we wondered: who’s been elected? Of course, in one very important sense it didn’t really matter who had been chosen as our pope.

At his last address to the College of Cardinals, having no idea who would be elected, Pope Benedict promised “unconditional reverence and obedience” to his successor. This, too, was and is, our attitude. With the Pope Emeritus, for whose pontificate we again express our heartfelt gratitude to God, we readily give our unconditional reverence and obedience to Pope Francis.

But when at last the announcement was made, many of us – and I include myself – were taken by surprise. However, once Pope Francis had appeared upon the balcony with that lovely smile, his simplicity and humility evident, the initial surprise soon gave way to the certainty that this is an inspired and inspiring choice. Yes, this is the work of the Holy Spirit.

Pope Francis’ first act, after cracking a joke about the cardinals having to go to the ends of the earth to find a new Bishop of Rome, was to ask us to pray for him, before he bestowed his blessing upon us. The silence at this moment was a powerful proclamation.

We will continue to pray for our new pope; and I am sure that through his papacy we will be richly blessed. For Pope Francis places at God’s disposal a wealth of experience and many gifts.

As no doubt you’ve learned, Pope Francis was born in Buenos Aires, one of five children. His father came from Italy, from near Turin, and was a railway worker. As a young man the future pope planned to be a chemist. However, God had a different plan!

Obedient to God’s will, Jorge Mario Bergoglio entered the Society of Jesus instead. Clearly highly intelligent, he studied and has taught theology and philosophy, psychology and literature. From 1973 to 1979, he was the Provincial of the Argentinean Jesuits. [This was a difficult period for Argentina; it was the time of the military dictatorship.] He was named Auxiliary Bishop of Buenos Aires in 1992 before becoming the Archbishop in 1998, and then made a Cardinal by Bl. Pope John Paul II in 2001. On reaching 75, Cardinal Bergoglio, as he was then, submitted his resignation as Archbishop of Buenos Aires to Pope Benedict. Perhaps he was looking forward to a quieter life? But now we know, God had a different plan.

Soon after his election yesterday Pope Francis enjoyed a telephone conversation with our still beloved Pope Emeritus. Maybe Pope Francis asked his predecessor for a few tips. Undoubtedly, the Pope Emeritus assured Pope Francis of his unceasing and fervent prayers for him and for the whole Church. This conversation was a most historic moment: a new pope speaking with his predecessor on the phone. And, just as the ending of Benedict’s papacy has its place in our great history, so too does the election of Pope Francis: the first non-European for 1000 years; the first ever from Latin America; the first Jesuit pope; the first Francis.

Francis. I really do think that’s a lovely choice of name. Firstly, we think of St. Francis of Assisi and his simplicity, humility and poverty. We know that as Archbishop of Buenos Aires, Pope Francis lived a very simple life, choosing to live in a small apartment and use public transport. Such simplicity gave powerful credibility to the great concern he expressed for the poor in his homilies and speeches. He spoke against the unjust distribution of goods which creates a situation of social sin that cries out to Heaven and limits the possibilities of a fuller life for so many of our brothers and sisters; our brothers and sisters for whom there must be created the conditions that protect their rights and allow them to build their own future. I believe we are blessed with a pope who will follow St. Francis’s sound advice: “Preach the Gospel at all times. When necessary, use words.” In fact, I understand he’s already demonstrated his commitment to justice as pope by going back to his hotel to pay the bill!

But we also think of St. Francis Xavier, one of the greatest saints of the Society of Jesus and renowned missionary. What will the mission of Pope Francis be? It will be the same mission of every pope, the same mission we hear Christ entrusting to St. Peter and the Apostles in the Gospels.

Allow me, however, to turn to our first reading at Mass this evening, so to explore a little further this mission of Pope Francis. It’s taken from the book of Exodus. The event described occurred during that wonderful journey of liberation experienced by the Israelites, when God led them out of servitude. Yet what did they do? They turned away from the living God who alone could guarantee them authentic freedom. Instead they turned to a god of their own fashioning.

The mission of Pope Francis is to lead us into an ever greater liberty by helping us to resist the attraction of the idols we create for ourselves; idols which end up enslaving us. He will encourage us to be faithful to God, living and true: the God of Abraham, Isaac and Jacob; the one God fully revealed to us in the person of Jesus Christ as Father, Son and Holy Spirit – the communion of Love in whom we are set free to be fully ourselves. Just like Pope Benedict, Pope Francis will, I’m sure, invite us to keep our gaze on Christ, to believe in him. He will ask us to entrust ourselves and the Church to Christ, sent by the Father to lead us to the Father. So too Pope Francis will invite us to be guided by the Holy Spirit as renewal of the Church within its continuity carries on. We ought not to be at all surprised when, in the tradition of his predecessors, Pope Francis speaks up for the most vulnerable, defending the dignity of human life from conception to natural end; nor when he champions the meaning and purpose God has established for our human sexuality, for marriage and family life.

The mission of Pope Francis is to challenge every person, each one of us, to respond generously to the call to personal holiness. Yet, I am sure he will do so with great compassion and with the gentleness of another great St. Francis, Francis de Sales. For Pope Francis is a sensitive pastor, willing “to listen, walk with people and understand” our weakness. Moses knew the great mercy of God. That’s why he knew God would hear his plea; and despite the terrible betrayal of God committed by the people with whom he walked, Moses knew God would not destroy them. Pope Francis has written: “Only someone who has encountered mercy, who has been caressed by the tenderness of mercy, is happy and comfortable with the Lord”. When we have turned away from God, the mission of Pope Francis is to enable us to permit ourselves to experience, “the caress of the mercy of Jesus Christ on my sin.”

On the radio this morning I was asked if I was pleased personally with the appointment of this new pope. Was he ‘my kind of man?’ That is the wrong question! He is given to us as a great gift. We rejoice in receiving him into our hearts. My judgement about him doesn’t matter. Nor does the judgement of the media. As the Gospel tells us, only one judgement matters: that of the Lord himself.

So as we joyfully thank God for his election, let us support Pope Francis with our unfailing prayer and our loving fidelity. Let us join our prayers to those of this man of profound prayer, who this morning went to pray before an icon of the Blessed Virgin in the Basilica of St. Mary Majors. Invoking the intercession of the Mother of the Church, let us pray that Pope Francis will be strong and faithful in the work God has given him to carry out, and that the exercise of his Petrine ministry will always be to the greater glory of God. Amen.