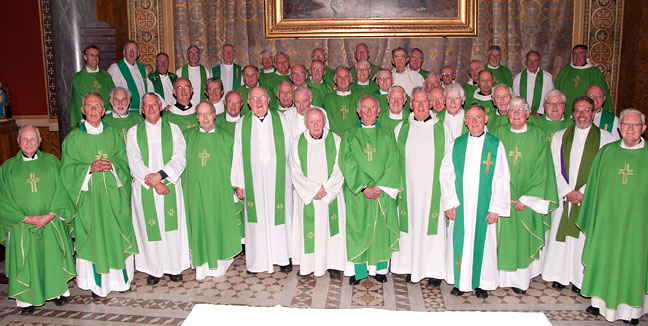 It wasn’t just Her Majesty the Queen who celebrated her Diamond Jubilee in 2012. Two priests – Clifton’s Fr Gerard Rodgers and Fr Timothy Harrington of Shrewsbury, had the honour of meeting Pope Benedict XVI as they travelled to Rome to mark their 60 years of priestly service.

They were part of a group of 44 priests celebrating jubilees – two Diamond, 27 Golden and 15 Ruby Jubilarians.

The priests had responded to an invitation by Mgr Nicholas Hudson, Rector of the Venerable English College in Rome, to be guests of the College.

After arriving in Rome, they went straight to the College’s summer villa – Palazzola – overlooking Lake Albano, opposite the Pope’s summer residence at Castelgandolfo.

On 7 November, they attended the Wednesday General Audience with the Holy Father, Pope Benedict XVI and enjoyed the hospitality of the Venerabile for lunch and a festal dinner.

The Rt Rev Christopher Budd, Bishop of Plymouth and one of the golden Jubilarians, presided at the Mass of Thanksgiving in the College that evening.

In a speech after dinner the Rector pointed out that the Jubilarians represented 2070 years of priesthood:

“Thank you for offering yourselves for the priesthood all those years ago; thank you for your fidelity to your vocation that this year of Jubilee represents”.

The customary “ad multos annos” toast was then proposed and responded to with great enthusiasm by the students and other guests.