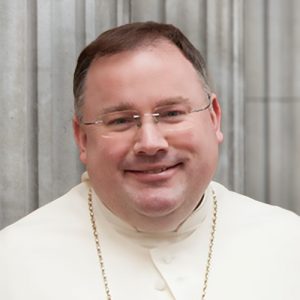 A profile of the Apostolic Administrator of the Prefecture of the Falkland Islands, Fr Hugh Allan, O.Praem.

Apostolic Administrator of the Prefecture of the Falkland Islands

Father Hugh Allan is the Apostolic Administrator of the Prefecture of the Falkland Islands and Ecclesiastical Superior of the Missions sui iuris of the islands of Ascension, St Helena and Tristan da Cunha ad quinquennium (for a period of five years).

The Right Reverend Hugh Allan, O.Praem. was born in Hertfordshire, England, to a Scottish family from the town of Auchtermuchty, located close to the village of Falkland.

Raised as a Free Presbyterian, he converted to Catholicism at the age of 16 and trained to be a teacher at St Mary’s University, Twickenham. On leaving university, he joined the Order of Canons Regular of Prémontré, also known as the Premonstratensians, the Norbertines or ‘White Canons’. Following his noviciate, he was sent to complete further studies at St Benet’s Hall, Oxford. He made his solemn profession on 27 October 2001 and was ordained a priest on 22 November 2002 by Bishop Terence Brain.

In 2008, the Norbertines opened a new Priory in Chelmsford and he was appointed superior to this new canonry. At the same time, he was appointed parish priest of Chelmsford and has also recently served as the Area Dean for Mid-Essex. He was appointed Apostolic Administrator of the Falkland Islands and Ecclesiastic Superior of St. Helena, Ascension Island and Tristan da Cunha by Fernando Cardinal Filoni on 26 October 2016 for a period of five years.

In recognition of this ecclesiastical appointment, Hugh Allan was also elevated to the title of ‘Titular Abbot of Beeleigh’ by the Abbot General of the Norbertine Order, the Most Revd Thomas Handgrätinger, O.Praem.

For more, please visit the official site for the Prefecture of the Falkland Islands.