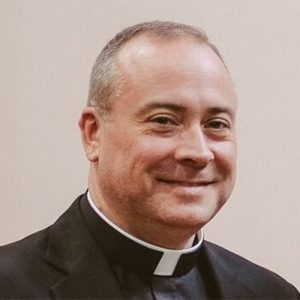 A profile of Fr Paul Douthwaite - the Bishops’ Prisons Adviser.

Fr Paul Douthwaite is the National Catholic Chaplain for Prisons.

At their Plenary Assembly at Hinsley Hall in November 2017, the Catholic Bishops’ Conference of England and Wales appointed Fr Paul Douthwaite as National Catholic Chaplain for Prisons, in succession to Monsignor Roger Reader who will leave the post at the end of the year. Bishop Richard Moth, liaison Bishop for Prison Ministry, writes:

“A great debt of gratitude is owed to Mgr Roger Reader for his outstanding service to the Prison community and to the wider Church in his a capacity as Catholic Bishops’ Prisons Advisor. He has brought so much to those in his pastoral care and to the Catholic chaplains who serve in our prisons. His work in promoting catechesis amongst the prison population has been especially fruitful, along with the developments he has brought to the Annual Prison Chaplains’ Conference. He will be greatly missed, but goes to his new post as Vice-Rector of St. Alban’s College, Valladolid, with the prayers and good wishes of many prisoners, staff and chaplains.”

Fr Paul Douthwaite is a priest of the Diocese of Hexham and Newcastle. He studied for the priesthood at the Franciscan Study Centre and the University of Kent at Canterbury where he obtained a Honours Degree in Theology. He was ordained in 1998 as a priest for the Redemptorist Congregation and took up his first appointment in Liverpool at the Parish of Our Lady of the Annunciation, Bishop Eton and also became Chaplain to Saint Francis Xavier’s College. Additionally, in 1999 he was appointed Vocations Director and Co-ordinator of Youth Ministry for the Redemptorists within the United Kingdom. From 2003 till 2007, Fr Paul ministered as a Commissioned Chaplain in Her Majesty’s Royal Air Force. On returning to his home Diocese of Hexham and Newcastle in 2007 he took up various short-term appointments in hospitals, parishes, prisons and during this time completed further studies in Religious Education. For the past eight years Fr Paul has engaged in full time prison ministry, primarily at HMP Frankland, a High Security Prison in Durham, whilst offering Sacramental Support to a number of prisons across the Diocese of Hexham & Newcastle and Middlesbrough.

This appointment was approved by Bishop Richard Moth, the Bishop for Prisons, and his brother Bishops at their Plenary Assembly. His Eminence, Cardinal Vincent Nichols, President of the Conference said:

“On behalf of all members of the Bishops’ Conference, we are immensely grateful for the contribution that Mgr Roger Reader has made in the lives of prisoners and in the support of prison chaplains over many years of service. We echo all that Bishop Moth says and pray that his new ministry will be blessed and fruitful. We are delighted that Fr Paul will begin his work in this important post as National Catholic Chaplain. We are grateful for the generosity of Bishop Séamus Cunningham, his Bishop, in releasing him for this work. Fr Paul’s experience will well serve and support the chaplains in our prisons as well as those prisoners who benefit so much from the presence of Catholic Chaplains in their lives.”

On being appointed to this role by the Bishops’ Conference of England and Wales, Fr Paul said:

“I have been privileged to serve for some years in prison ministry, caring for the prisoners whom Jesus had most concern for in the Gospels. I am extremely humbled to be asked to take on this new role in which I will not only have the honour to advise the Bishops of England and Wales in matters concerning prisoners and prisons but also, on their behalf, provide pastoral care to the Roman Catholic Chaplains serving in over 120 prisons in England and Wales. I look forward to this mammoth task ahead, to working closely with Bishop Richard Moth, liaison Bishop for Prisons, and I pray that with God’s help I will be able to assist and enable our many Catholic Chaplains, Volunteers and Prison Staff to care for the prisoners, as Jesus asked, so that they may know a God of love and mercy.”