Jesus is entombed but what happened on Holy Saturday after the Death of Jesus?

Following the Death of Jesus on the Cross, Joseph of Arimathea, a member of the Sanhedrin and a secret follower of Jesus, who had not consented to his condemnation, went to Pilate to request the body of Jesus (Lk 23:50–52).

Another secret follower of Jesus and member of the Sanhedrin named Nicodemus brought about a hundred-pound weight mixture of spices and helped wrap the body of Jesus (Jn 19:39–40).

Pilate asked for confirmation from the centurion of whether Jesus was dead (Mk 15:44). A soldier had pierced the side of Jesus with a lance causing blood and water to flow out and Pilate was informed that Jesus was dead. Joseph of Arimathea took Jesus’ body, wrapped it in a clean linen shroud, and placed it in his own new tomb that had been carved in the rock (Mt 27:59–60) in a garden near the site of the crucifixion.

Nicodemus brought myrrh and aloes, and placed them in the linen with the body, in keeping with Jewish burial customs (Jn 19:39–40).

They rolled a large rock over the entrance of the tomb.

Then they returned home and rested, because Shabbat had begun at sunset (Lk 23:54–56). The Church spends this day in prayer and fasting, meditating on the Passion and Death of Jesus and His Descent into Hell, awaiting his Resurrection.

The Easter Vigil Following ancient tradition, the Church keeps vigil for the Lord, the faithful carry lighted lamps, as if looking for the Lord when He returns. The ceremony begins after nightfall and must end before daybreak. Even though it be celebrated before midnight, this is a Paschal Mass of the Resurrection. 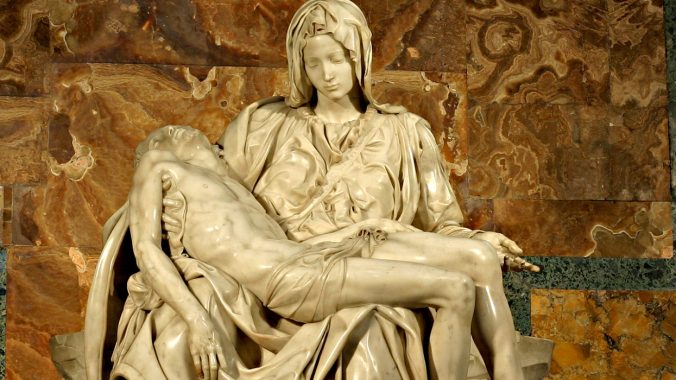 At the Foot of the Cross: Pietà - 'The Pity'

We arrive at Holy Saturday and the third instalment of our four-part art and culture series 'At the Foot of the Cross'. Today Michaelangelo's famous and profoundly beautiful Pietà.