According to the Gospel accounts, the Royal Guard arrested Jesus in the Garden of Gethsemane after Judas Iscariot had told the guards that whomever he kissed was the one they were to arrest. Following his arrest, Jesus was taken to the house of Annas, the father-in-law of the high priest, Caiaphas.

In 2020, acts of public worship were suspended before, during and after Holy Week to address the global COVID-19 pandemic. This year, the Celebrations for Holy Week and the Sacred Triduum will be in the presence of Christ’s faithful.

However, there is a continuing need for social distancing measures, mask wearing and careful hygiene. To this end, the Bishops’ Conference has provided guidance for Holy Week. Here’s the section on Good Friday:

The Celebration of the Passion of the Lord should take place in the church with a congregation wherever possible. Sufficient ministers should be prepared to assist in this liturgy. Care should be taken for the numbers of people present for this liturgy which is very popular with the faithful. If necessary, additional celebrations can be considered, taking into account the risks associated for the faithful in travelling to and from church.

The proclamation of the Passion according to St John should be read in a dignified yet expeditious manner with or without multiple readers. The turba parts should not be exclaimed by the congregation.

The Universal Prayer should be carried out without undue delay. Like last year, a special intention (For the afflicted in time of Pandemic) is to be inserted before the intercession For those in Tribulation (X). This prayer can be found on this link.

For The Adoration of the Holy Cross, the Cross can either be veiled or unveiled according to whether the first or second form of the Showing is used. It may be expedient to use the second form for ease. For the Adoration, the Veneration of the Cross is limited to the celebrant alone. After he has done this, he should “invite the people present in a few words to adore the Holy Cross and afterwards, holds the Cross elevated higher for a brief time, for the faithful to adore in silence.” (Rubrics #19). This may be expressed by the faithful through a short period of silent prayer, a gesture such as a genuflection or bow in their places, followed by another short period of silent prayer.

Holy Communion should be given under one kind from the Reserved Sacrament according the previous Guidance offered by the Bishops’ Conference.

Other Celebrations on Good Friday

The provision of other devotions on Good Friday may mitigate against the numbers which could congregate in parish churches for the singular celebration of the Liturgy of the Lord’s Passion. Celebrations of the Stations of the Cross should not involve the moving of the congregation on pilgrimage around the church. The celebrant should move from Station to Station with the people remaining in their places. Walks of Witness should not take place.

Outdoor congregations for Witness Services (which are often the culmination of a Walk of Witness) must take into account the requirements for permission by the civil authorities if this is not to take place within the boundaries of a place of worship. Government Guidance for social distancing, outdoor singing (if this is to take place) and non-returnable service sheets must also be adhered.

It is recommended that at all acts of worship on Good Friday in the churches of England and Wales, the opportunity for the faithful to contribute to the Holy See collection for the Holy Places of Palestine should be available. 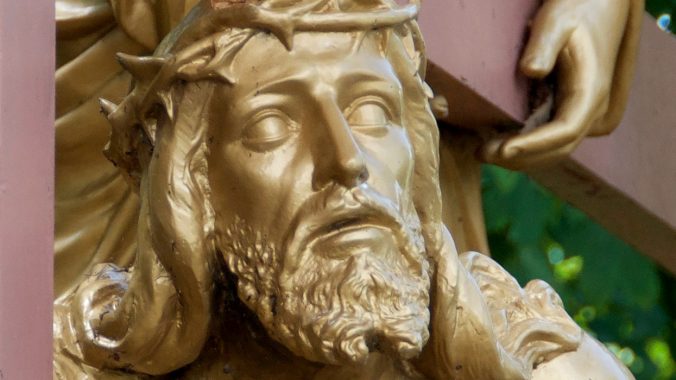