Pope Francis released his message for the World Day of Prayer for Vocations, and urges all religious and clergy to look to St. Joseph as a model of unreserved fidelity to God’s invitation to service. 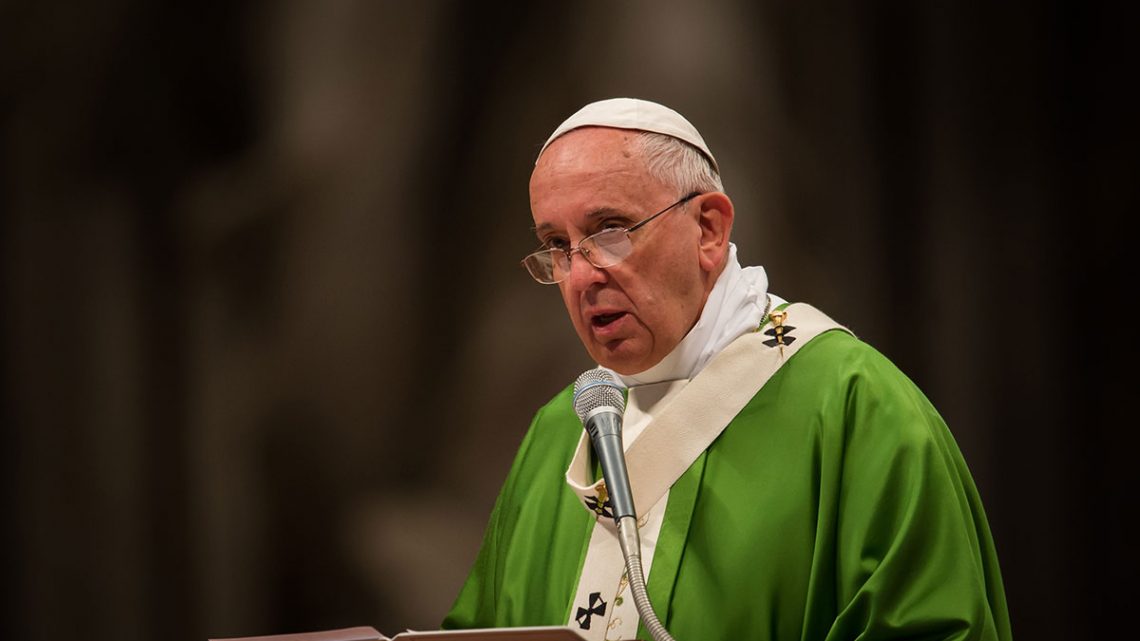 The World Day of Prayer for Vocations will be observed on the 4 Sunday of Easter, Good Shepherd Sunday, April 25.

Saint Joseph: The Dream of Vocation

8 December last, the one hundred fiftieth anniversary of the declaration of Saint Joseph as Patron of the Universal Church, marked the beginning of a special year devoted to him (cf. Decree of the Apostolic Penitentiary, 8 December 2020). For my part, I wrote the Apostolic Letter Patris Corde, whose aim was “to increase our love for this great saint”. Saint Joseph is an extraordinary figure, yet at the same time one “so close to our own human experience”. He did not do astonishing things, he had no unique charisms, nor did he appear special in the eyes of those who met him. He was not famous or even noteworthy: the Gospels do not report even a single word of his. Still, through his ordinary life, he accomplished something extraordinary in the eyes of God.

God looks on the heart (cf. 1 Sam 16:7), and in Saint Joseph he recognized the heart of a father, able to give and generate life in the midst of daily routines. Vocations have this same goal: to beget and renew lives every day. The Lord desires to shape the hearts of fathers and mothers: hearts that are open, capable of great initiatives, generous in self-giving, compassionate in comforting anxieties and steadfast in strengthening hopes. The priesthood and the consecrated life greatly need these qualities nowadays, in times marked by fragility but also by the sufferings due to the pandemic, which has spawned uncertainties and fears about the future and the very meaning of life. Saint Joseph comes to meet us in his gentle way, as one of “the saints next door”. At the same time, his strong witness can guide us on the journey.

Saint Joseph suggests to us three key words for each individual’s vocation. The first is dream. Everyone dreams of finding fulfilment in life. We rightly nurture great hopes, lofty aspirations that ephemeral goals – like success, money and entertainment – cannot satisfy. If we were to ask people to express in one word their life’s dream, it would not be difficult to imagine the answer: “to be loved”. It is love that gives meaning to life, because it reveals life’s mystery. Indeed, we only have life if we give it; we truly possess it only if we generously give it away. Saint Joseph has much to tell us in this regard, because, through the dreams that God inspired in him, he made of his life a gift.

The Gospels tell us of four dreams (cf. Mt 1:20; 2:13.19.22). They were calls from God, but they were not easy to accept. After each dream, Joseph had to change his plans and take a risk, sacrificing his own plans in order to follow the mysterious designs of God, whom he trusted completely. We may ask ourselves, “Why put so much trust in a dream in the night?” Although a dream was considered very important in ancient times, it was still a small thing in the face of the concrete reality of life. Yet Saint Joseph let himself be guided by his dreams without hesitation. Why? Because his heart was directed to God; it was already inclined towards him. A small indication was enough for his watchful “inner ear” to recognize God’s voice. This applies also to our calling: God does not like to reveal himself in a spectacular way, pressuring our freedom. He conveys his plans to us with gentleness. He does not overwhelm us with dazzling visions but quietly speaks in the depths of our heart, drawing near to us and speaking to us through our thoughts and feelings. In this way, as he did with Saint Joseph, he sets before us profound and unexpected horizons.

Indeed, Joseph’s dreams led him into experiences he would never have imagined. The first of these upended his betrothal, but made him the father of the Messiah; the second caused him to flee to Egypt, but saved the life of his family. After the third, which foretold his return to his native land, a fourth dream made him change plans once again, bringing him to Nazareth, the place where Jesus would begin his preaching of the Kingdom of God. Amid all these upheavals, he found the courage to follow God’s will. So too in a vocation: God’s call always urges us to take a first step, to give ourselves, to press forward. There can be no faith without risk. Only by abandoning ourselves confidently to grace, setting aside our own programmes and comforts, can we truly say “yes” to God. And every “yes” bears fruit because it becomes part of a larger design, of which we glimpse only details, but which the divine Artist knows and carries out, making of every life a masterpiece. In this regard, Saint Joseph is an outstanding example of acceptance of God’s plans. Yet his was an active acceptance: never reluctant or resigned. Joseph was “certainly not passively resigned, but courageously and firmly proactive” (Patris Corde, 4). May he help everyone, especially young people who are discerning, to make God’s dreams for them come true. May he inspire in them the courage to say “yes” to the Lord who always surprises and never disappoints.

A second word marks the journey of Saint Joseph and that of vocation: service. The Gospels show how Joseph lived entirely for others and never for himself. The holy people of God invoke him as the most chaste spouse, based on his ability to love unreservedly. By freeing love from all possessiveness, he became open to an even more fruitful service. His loving care has spanned generations; his attentive guardianship has made him patron of the Church. As one who knew how to embody the meaning of self-giving in life, Joseph is also the patron of a happy death. His service and sacrifices were only possible, however, because they were sustained by a greater love: “Every true vocation is born of the gift of oneself, which is the fruit of mature sacrifice. The priesthood and consecrated life likewise require this kind of maturity. Whatever our vocation, whether to marriage, celibacy or virginity, our gift of self will not come to fulfilment if it stops at sacrifice; were that the case, instead of becoming a sign of the beauty and joy of love, the gift of self would risk being an expression of unhappiness, sadness and frustration” (ibid., 7).

For Saint Joseph, service – as a concrete expression of the gift of self – did not remain simply a high ideal, but became a rule for daily life. He strove to find and prepare a place where Jesus could be born; he did his utmost to protect him from Herod’s wrath by arranging a hasty journey into Egypt; he immediately returned to Jerusalem when Jesus was lost; he supported his family by his work, even in a foreign land. In short, he adapted to different circumstances with the attitude of those who do not grow discouraged when life does not turn out as they wished; he showed the willingness typical of those who live to serve. In this way, Joseph welcomed life’s frequent and often unexpected journeys: from Nazareth to Bethlehem for the census, then to Egypt and again to Nazareth, and every year to Jerusalem. Each time he was willing to face new circumstances without complaining, ever ready to give a hand to help resolve situations. We could say that this was the outstretched hand of our heavenly Father reaching out to his Son on earth. Joseph cannot fail to be a model for all vocations, called to be the ever-active hands of the Father, outstretched to his children.

I like to think, then, of Saint Joseph, the protector of Jesus and of the Church, as the protector of vocations. In fact, from his willingness to serve comes his concern to protect. The Gospel tells us that “Joseph got up, took the child and his mother by night” (Mt 2:14), thus revealing his prompt concern for the good of his family. He wasted no time fretting over things he could not control, in order to give full attention to those entrusted to his care. Such thoughtful concern is the sign of a true vocation, the testimony of a life touched by the love of God. What a beautiful example of Christian life we give when we refuse to pursue our ambitions or indulge in our illusions, but instead care for what the Lord has entrusted to us through the Church! God then pours out his Spirit and creativity upon us; he works wonders in us, as he did in Joseph.

Together with God’s call, which makes our greatest dreams come true, and our response, which is made up of generous service and attentive care, there is a third characteristic of Saint Joseph’s daily life and our Christian vocation, namely fidelity. Joseph is the “righteous man” (Mt 1:19) who daily perseveres in quietly serving God and his plans. At a particularly difficult moment in his life, he thoughtfully considered what to do (cf. v. 20). He did not let himself be hastily pressured. He did not yield to the temptation to act rashly, simply following his instincts or living for the moment. Instead, he pondered things patiently. He knew that success in life is built on constant fidelity to important decisions. This was reflected in his perseverance in plying the trade of a humble carpenter (cf. Mt 13:55), a quiet perseverance that made no news in his own time, yet has inspired the daily lives of countless fathers, labourers and Christians ever since. For a vocation – like life itself – matures only through daily fidelity.

How is such fidelity nurtured? In the light of God’s own faithfulness. The first words that Saint Joseph heard in a dream were an invitation not to be afraid, because God remains ever faithful to his promises: “Joseph, son of David, do not be afraid” (Mt 1:20). Do not be afraid: these words the Lord also addresses to you, dear sister, and to you, dear brother, whenever you feel that, even amid uncertainty and hesitation, you can no longer delay your desire to give your life to him. He repeats these words when, perhaps amid trials and misunderstandings, you seek to follow his will every day, wherever you find yourself. They are words you will hear anew, at every step of your vocation, as you return to your first love. They are a refrain accompanying all those who – like Saint Joseph – say yes to God with their lives, through their fidelity each day.

This fidelity is the secret of joy. A hymn in the liturgy speaks of the “transparent joy” present in the home of Nazareth. It the joy of simplicity, the joy experienced daily by those who care for what truly matters: faithful closeness to God and to our neighbour. How good it would be if the same atmosphere, simple and radiant, sober and hopeful, were to pervade our seminaries, religious houses and presbyteries! I pray that you will experience this same joy, dear brothers and sisters who have generously made God the dream of your lives, serving him in your brothers and sisters through a fidelity that is a powerful testimony in an age of ephemeral choices and emotions that bring no lasting joy. May Saint Joseph, protector of vocations, accompany you with his fatherly heart! 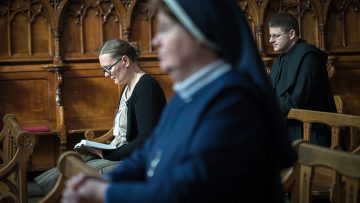 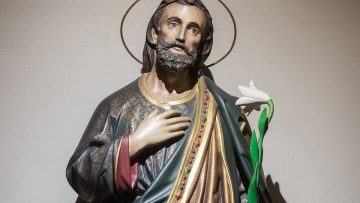 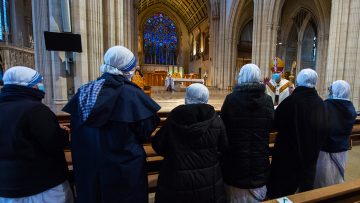 Living Joyfully – A Celebration of Religious Life in the UK 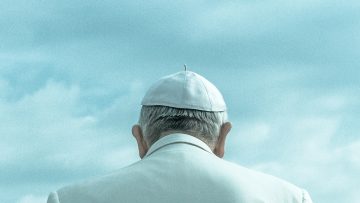