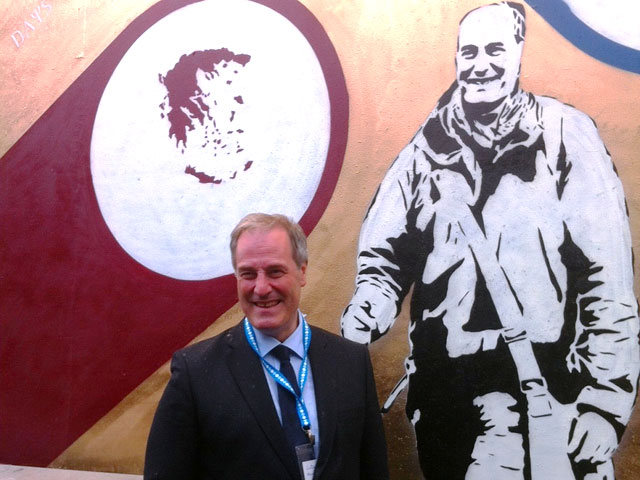 As the Olympic Village begins to welcome athletes from around the world, Lord Michael Bates, Deputy Chairman of the Conservative Party, unveiled three wall murals this week on Great Eastern Street in Shoreditch, East London. The purpose of the 60 square metre murals, painted by well-known London street artist, CODE FC and London graphic artist, Jack Haslehurst, is to remind London and its visitors of the significance of a global truce during the Olympic and Paralympic Games.

It was for this reason that Lord Bates chose to embark upon his remarkable ‘Walk for Truce’, covering 3,000 miles by foot over 300 days from Olympia to Westminster between Easter 2011 and February 2012 in support of the unanimous 1993 UN Resolution 48/1.

The Olympic Truce has its origins in ancient Greece. It allowed athletes, artists and spectators to travel to Olympia to participate in the Olympic Games and return home in peace. In 1993, the International Olympic Committee revived the tradition of the Olympic Truce. In the modern Olympic Games, the Truce aims partially to highlight how sport can bring the world together without racism, politics or prejudice.

Before every Summer and Winter Games, the government of the next host country is asked to take a resolution, entitled ‘Building a peaceful and better world through sport and the Olympic ideal’, and present it to the UN General Assembly. Following tradition, in October 2011 all 193 member states of the United Nations co-sponsored the resolution, introduced by Seb Coe, the Chair of the London Organising Committee of the Olympic and Paralympic Games (LOCOG), on behalf of the UK Government.

When asked why he chose to embark on a walk for Truce, Lord Bates responded:

“This is a defining moment in Britain’s history where we can not only make a difference but can lead the rest of the world in achieving greater peace”. He hopes that through the Truce “humanitarian aid will reach conflict zones during the period of Truce thereby saving lives”, and desired to “see awareness raised of the Olympic Truce and its values rediscovered as the founding purposes of the Olympic Games.” He added, “I hope that the legacy of the Truce from the UK in 2012 will raise the international bar of expectation for the Truce for Russia in 2014 and Brazil in 2016. I also hope that dialogues might commence in current conflicts and long-term resolutions be found.”

“The whole House will want to congratulate Lord Bates on his great feat. We will promote a fresh resolution at the UN calling for the continued observance of the Olympic truce for the 2012 games. We wish to make the most of that historic opportunity, [and] we are considering other international initiatives to promote the spirit of the truce.”

Helping to unveil the murals with Lord Bates was James Parker, Catholic Executive Coordinator of the 2012 Games. He publicly expressed gratitude on behalf of the many people who are taking the Truce seriously and rediscovering the original purpose of the Games which was as a vehicle to build peace:

“Every serious athlete has to go many extra miles to achieve greatness,” said Parker. “Lord Bates may not count himself as an athlete of the track and field. He has, however, proven himself to be something much greater than this. He has taken the road less traveled and chosen to respond to the heart’s cry of thousands of young people across our cities who requested that a legacy of the 2012 Games would be peace on their streets, in their homes and in their hearts. Lord Bates’ actions stirred the British government, and many others globally, to wake up and to take seriously the cause of peace. It was for this reason that the Catholic community, supported by the Christian charity, More Than Gold, launched a nationwide 100 Days of Peace which we are still in the midst of celebrating and actively living out. Surely a legacy of peace is worth much, much more than any gold, silver or bronze medal.”

During Games time, LOCOG will invite athletes, officials and dignitaries to highlight their support for the truce by signing the Olympic Truce Wall in the Olympic and Paralympic Village.