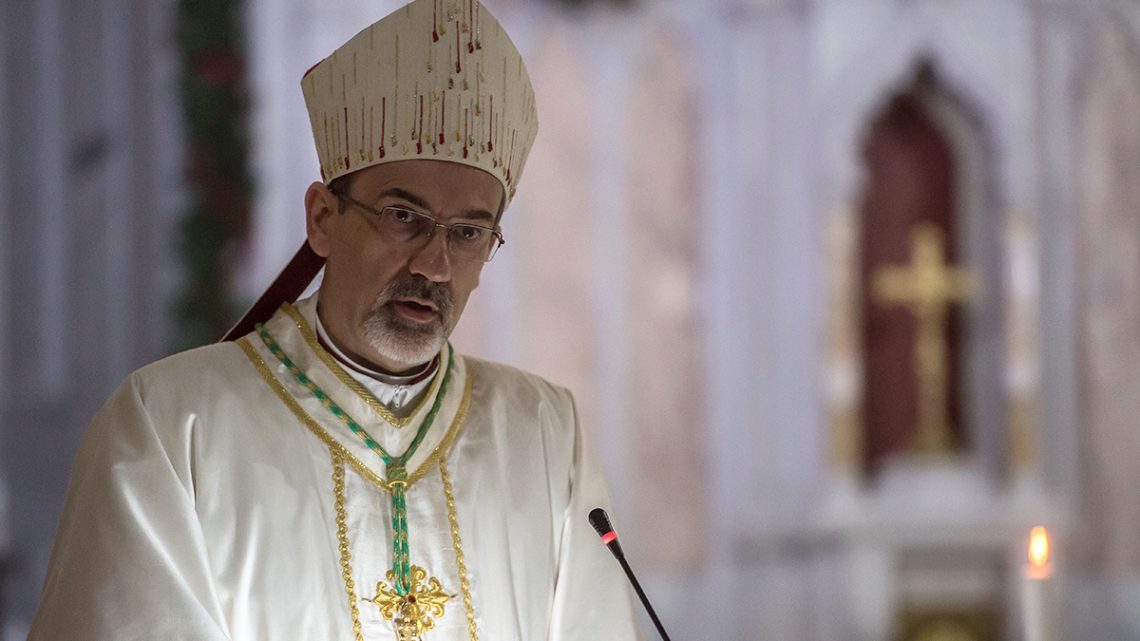 CBCEW » Holy Land » » Custodian of the Holy Land calls on...

Fr Pierbattista Pizzaballa OFM, the Franciscan Custos of the Holy Land, has visited the UK to call on Catholics to make the pilgrimage to the Holy Land to show their solidarity with the Christians living where Christ once walked.

In this CCN audio interview, Fr Pizzaballa discusses exactly his role is as Custos of the Holy Land, and discusses how Christians, Muslims and Jews live and work together dealing with the very practical day to day issues.

The Custos is supporting the Terra Sancta Education Trust, a charity that works with local schools in Bethlehem and beyond and aims to improve the education of Christian families in the Holy Land whilst working to relieve poverty. The trust also promotes respect and dialogue between different faith communities.

Podcast interview: The Custos of the Holy Land (mp3)

The Custos of the Holy Land is the Minister Provincial (i.e. the major superior) of the Friars Minor living in the whole Middle East. He has jurisdiction over the territories of Israel, Palestine, Jordan, Lebanon, Egypt (partially), Cyprus and Rhodes without counting the numerous houses (Commissariats) in various parts of the world (worth mentioning those of Rome and Washington).

The main task of the Custos, besides animating the life of the friars, is to coordinate and direct the reception of pilgrims who come over to the Holy Land in pilgrimage and pray at the shrines of our Redemption.

Such a task was handed out by the Holy See more than 600 years ago. The term used at those times to designate this task was “custody” of the holy places from which derived the terms still in use “Custody” and “Custos”.
The first and most important role of the Custos therefore is to receive the pilgrims at the Holy Shrines, offering them spaces and the possibility to pray while caring to give shelter even to those who cannot afford to use expensive hotels. At the same time the pilgrims are offered the possibility to find the friars who are ready to receive and hear them. All the catholic Christian sanctuaries are under his jurisdiction. He sees to it that enough economical support is given to fulfil this most important function at these holy places.

In the Holy Land Custos is considered as one of the main Christian religious authorities. He, together with the Greek Orthodox Patriarch and the Armenian Orthodox Patriarch , is responsible of the Status Quo, the code which regulates life at the Holy Sepulchre and Bethlehem.

By right he forms part of the Assembly of Catholic Ordinaries of the Holy Land (the Bishops of the local Catholic Church).