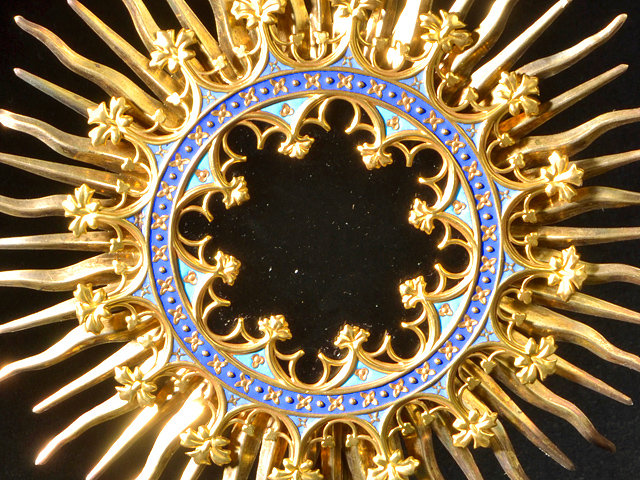 The Archbishop of Southwark, the Most Rev Peter Smith, and the Abbot of Farnborough Abbey, the Rt Rev Dom Cuthbert Brogan OSB, are delighted to announce that, through a private treaty sale, a number of key historic items from the former Benedictine Abbey at Ramsgate in Kent are to remain in Catholic hands. The majority will return to the church of St. Augustine in Ramsgate, the magnificent Grade I church which Augustus Welby Northmore Pugin (1812-1852) designed and built next to his own house, The Grange. Pugin designed and fitted out the church in every detail and the items returning to St. Augustine’s church complement the rich collections already there. Equally, the items acquired by Farnborough Abbey complement the Abbey’s important collections of sacred silver.

The Archbishop of Southwark and the Abbot of Farnborough would particularly like to thank Abbot Paulinus Greenwood, Abbot of the Benedictine Community formerly based in Ramsgate, and auctioneers Dominic Winter for their full cooperation and support in facilitating this happy outcome.

Amongst the historic items returning to St. Augustine’s is a beautiful monstrance of around 1850 which is very similar to one which Pugin designed for his other famous church, St. Gile’s, Cheadle, and a watercolour sketch by Pugin of the interior of St. Augustine’s, Ramsgate. This sketch was a preparatory study for a large drawing which Pugin sent for display at the Royal Academy in 1849. The monks at Benedictine Farnborough Abbey have acquired an important silver recusant chalice dating from 1633. English recusant silver of this early period is extremely rare due to the prohibition on Catholic worship following the Reformation. This chalice is engraved with scenes from the Passion of Christ. It was given to the monks at Ramsgate in the nineteenth century by a member of the Hales family, who were recusants. It had been in the Hale family for generations.

The sale of contents from Ramsgate Abbey came about because of the Ramsgate monks’ recent move to smaller premises at Chilworth in Surrey and on account of their need to raise sufficient funds to continue their work and mission. The Archdiocese of Southwark took back responsibility for St. Augustine’s church from the monks in 2010 and has instigated a major programme of repair with generous grant support from English Heritage. An appeal was launched last November in the River Room at the House of Lords, a room also designed by AWN Pugin. The parish priest, Fr Marcus Holden, has established a Friends of St. Augustine’s and patrons of the appeal include the broadcaster, Alistair Stewart, and the architectural writer, Clive Aslet. With the new acquisitions added to the existing collection, the Friends are planning to put on an exhibition.

Father Marcus Holden, said, “We have a major programme to bring St. Augustine’s back to as it was in Pugin’s day and the acquisition of these items contributes in a significant way to what we are seeking to achieve here in Ramsgate. Pugin decided to build this church here because St. Augustine had landed nearby in 597AD. We want St. Augustine’s to become a fitting place to commemorate both the towering achievements of Pugin and the coming of Christianity to England which captivated him. As we recall Pugin’s bicentenary on March 1st we will be celebrating not only an iconic national architect but a central figure of the Catholic revival”.

Nathan Winter of Dominic Winter Book Auctions said, “We are delighted to have been of assistance to the Archdiocese of Southwark in the retention of a number of key historic objects from St. Augustine’s Abbey in Ramsgate and to know that they will feature in the important restoration project now underway at the wonderful Pugin church there, widely regarded as one of the architect’s greatest achievements”.

The Abbot of Farnborough said, “Dominic Winter Book Auctions, the auctioneers, are to be commended for their professionalism and patience in negotiating this sale and for their sensitivity to the concerns of the wider Catholic community. All sacred vessels are important. The recusant chalice communicates with a particular eloquence the hardships suffered by Catholics in what are described in the inscription on the chalice as ‘cruel times’. We are relieved that this chalice will remain in appropriate hands.”

A small photo gallery featuring some of the historic items can be found on our Flickr photostream.

St. Michael’s Abbey, Farnborough, was founded from the Abbey of St. Pierre de Solesmes in 1895. It is a Benedictine monastery of the Subiaco Congregation. The English Province of this Congregation includes, in the UK, the abbeys of Farborough, Chilworth, Pluscarden and Prinknash. Farnborough’s abbey church and monastery were commissioned by the Empress Eugenie, widow of Napoleon III and designed by Gabriel Destailleur, the architect of Waddesdon Manor. The buildings are largely Grade I listed and house a considerable collection of historic ecclesiastical patrimony. 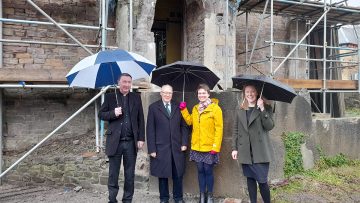