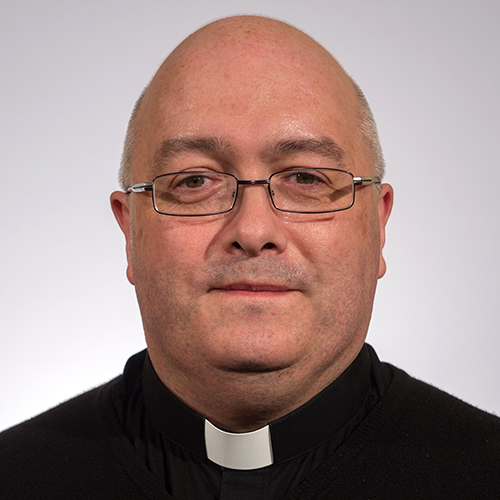 The Reverend Canon Christopher Thomas is the current General Secretary of the Catholic Bishops' Conference of England and Wales.

Christopher Thomas was born in 1969 in Swansea, South Wales. The youngest of four children, having completed his primary and secondary education in the state sector, he went to study chemical engineering at the University of Nottingham. He graduated with a Master of Engineering degree in 1991 and with a Doctorate in Philosophy in chemical engineering in 1994. He was a lecturer in that department from 1994 until 1995. Having been baptised in the Church in Wales, he was received into the full communion of the Catholic Church whilst a student in 1993 at the University by Fr Philip O’Dowd, the Catholic Chaplain.

In 1995 he was sent by Bishop James McGuinness to study for the priesthood for the Diocese of Nottingham at the Venerable English College in Rome. He studied at the Pontifical Gregorian University and completed studies in philosophy and theology, gaining a Licence in Sacred Theology specialising in fundamental theology.

He was ordained a priest in St Barnabas’ Cathedral, Nottingham by Bishop Malcolm McMahon OP in 2001 and was appointed an assistant priest at the Cathedral and Catholic Chaplain to Nottingham Trent University. In 2003 he was appointed parish priest of Corpus Christi, Clifton, Nottingham and in addition transferred to be Chaplain to the University of Nottingham where he remained until 2011. In 2011, he was appointed Episcopal Vicar for Finance and Administration and Moderator of the Curia by Bishop McMahon, and in September 2011, he took on ad interim additional responsibilities as Episcopal Vicar for Catholic Education with a particular focus on the programme of academy conversion in the Diocese.  He was a Trustee of the Diocese, Trustee of the Diocesan Education Service and a member of the national conference of Financial Secretaries.

On 9 May 2014, he was appointed General Secretary to the Bishops’ Conference of England and Wales in succession to Monsignor Marcus Stock, who was subsequently appointed as Bishop of Leeds. He took up his full responsibilities in November 2014.

The response of the Catholic Church in England and Wales to the Independent Inquiry into Child Sexual Abuse has been a constant and major part of his work as General Secretary.  He is a member of the Catholic Council for the Inquiry (which has Core Participant status) and has attended and participated in a number of Safeguarding colloquia and conferences in order to inform of best practice and contemporary issues of safeguarding. He has provided a number of witness statements to the Inquiry.

At their Plenary Assembly in May 2019, the Bishops reappointed Fr Thomas for another five years as General Secretary of the Conference

On 19 November 2019, at one of the regular meetings of the Chapter of the Cathedral Church of St Barnabas in Nottingham, Fr Thomas was installed an Honorary Canon of the Cathedral during the Chapter Mass by Bishop Patrick McKinney.  He is also a member of the Equestrian Order of the Holy Sepulchre of Jerusalem.