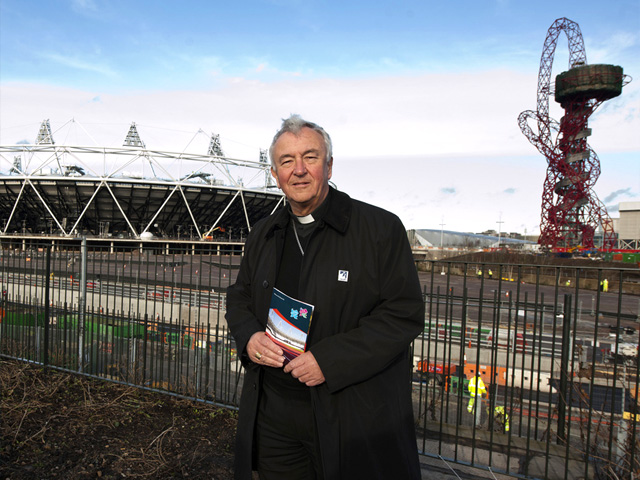 At the invitation of Mgr John Armitage, chair of the Catholic 2012 Committee and Catholic trustee on the board of Christian Olympic charity More Than Gold, and James Parker, Catholic executive coordinator for the Games and chair of More Than Gold’s denominational work, Archbishop Vincent Nichols and Bishop John Arnold of Westminster, Bishops Pat Lynch and Paul Hendricks of Southwark, Bishop Thomas McMahon of Brentwood and Bishop Richard Moth of the Forces joined local head teachers and members of the board of the John Paul II Foundation for Sport for an informative and in depth visit of the entire Olympic Park initiative.

The Catholic Church is, for the first time in history, engaging at the heart of the Olympic and Paralympic Games, especially through its involvement with the Christian charity More Than Gold. Local East London Catholic churches were strongly behind the bid to transform the toxic 504 acre wasteland into usable land that would serve locals, London as a whole and the nations of the world. The Catholic Bishops’ Conference has been committed to this venture for the past three years and this visit gave London’s Catholic bishops and significant others the opportunity to mark the significant progress made by the ODA and LOCOG.

“The Olympic and Paralympic Games are a moment of great opportunity for us all. These great sporting events generate all sorts of good ideas and initiatives, particularly for young people, reminding all of us of the importance of good health, the dignity of our bodies, the care of our physical well-being and its spiritual meaning.

“The example of many who are dedicated to training routines in preparation for these Games remind us of the need for good habits and routines in our own daily lives if we are to make the most of our God-given talents.”

James Parker said of the visit:

“This is the sixth time I have had the opportunity to visit the Olympic Park. What astounds me on every occasion is the quantity and quality of the work being accomplished not only to serve the Games but as a lasting legacy for the people of East London and the nation as a whole. Never before have so many first-rate business and sporting facilities, landscaped parkland and new housing for thousands of people become available in such a short space of time. The Olympic Park is fast becoming the new “must see” tourist attraction of our nation.”

As we say goodbye to another week of Christian Unity, the work of More Than Gold means that ecumenism is not only healthy and well but is offering practical ways for the combined Christian community to serve the nations of the world as they embark on our shores this summer.