The Catholic Bishops of England and Wales meet twice yearly in Leeds to discuss matters of national and international interest to the Church in England and Wales and the wider world. In their most recent meeting, they discussed and formulated a response to the Director of Public Prosecutions (DPP) Consultation on Assisted Suicide; reflected on the pilgrimage of the relics of St Thérèse of Lisieux; warmly received the Apostolic Constitution Anglicanorum coetibus and established a Commission to consider in detail the next steps in this process in England and Wales; gave their full backing to the launch of ‘Friends of the Holy Land’, a new charity designed to foster closer parish links with the Holy Land and completed voting on the new English Translation of the Roman Missal.

The Director of Public Prosecutions (DPP) Consultation on Assisted Suicide

Archbishop Vincent Nichols: “The DPP has been given a very difficult task because he has asked to frame this guidance within the context of the law in which to assist in a suicide is a crime; that context of the law has not changed, in fact it has been considered twice by parliament in the last eighteen months and twice parliament has decided not to change the law. “In our work, we have fashioned an alternative set of guidance that he might like to consider which we think holds the balance between factors which would assuredly lead to a prosecution and factors which could give rise to a decision not to prosecute.”

The list of factors in the interim Policy is currently flawed in that it identifies factors which are not relevant to non-prosecution and the inclusion of which could have serious harmful effects on society:

i) The disability or state of health of the victim: A sick or disabled person’s life should merit the same degree of protection by law. The inclusion of terminal illness as a factor against prosecution also contradicts the declared will of Parliament, which has recently rejected the legalisation of assisted suicide in such a case.

ii) The victim’s determination to commit suicide as demonstrated by previous suicide attempts: A history of suicide is more likely to be a sign of depression or some other underlying mental disorder, and hence a factor in favour of prosecution, than it is to be a factor against prosecution.

iii) Being a spouse, partner and close family member: The law should not presume that these relationships will always be supportive. Indeed, crimes of violence are very commonly carried out by someone known to the victim and not infrequently within the same family.

Pilgrimage of the relics of St Thérèse of Lisieux

The bishops thanked God for the graces brought to the Catholic community by the visit of the relics of St Thérèse of Lisieux and the signs of devotion which were evident during it. Archbishop Vincent Nichols: ”(The pilgrimage) demonstrated very clearly that within our society the pulse of a religious faith is still pretty strong.”

The bishops warmly received the Apostolic Constitution Anglicanorum coetibus, and its generosity towards those seeking full visible communion with the Holy See. They established a Commission to consider in detail the next steps in this process in England and Wales. They strongly reaffirmed their continuing commitment to ecumenical relations, working for the unity of his disciples for which Christ prayed (John 17:20-21). In particular, they looked forward to the next regular meeting with the Bishops of the Church of England ever seeking to deepen the shared mission to proclaim the Good News to the society in which we live.

Responding readily to the provisions of the Apostolic Constitution Anglicanorum coetibus, the Bishops’ Conference establishes a commission of Bishops and advisers to consider the next steps which may arise in this process.

‘The Commission is therefore available for consultation with the Congregation for the Doctrine of the Faith (cf. Anglicanorum coetibus 1§1) and to offer advice and guidance to Diocesan Bishops. Given the faculty for members of an Ordinariate “to maintain the liturgical, spiritual and pastoral traditions of the Anglican Communion within the Catholic Church, as a precious gift nourishing the faith of the members of the Ordinariate and as a treasure to be shared”(Anglicanorum coetibus III), the Commission is to advise the Bishops’ Conference on transitional arrangements for the reception of groups of Anglicans, should such requests arise. The Commission is also to consider those articles of the Apostolic Constitution Anglicanorum coetibus and the Complementary Norms that refer to the responsibilities of the Bishops’ Conference and to present suggestions for their fulfilment. The Episcopal members of the Commission are to be Archbishop-Elect Bernard Longley, Bishop Malcolm McMahon and Bishop Alan Hopes.’*

Friends of the Holy Land

His Beatitude Fouad Twal’s address can be found here.

Archbishop Vincent Nichols: “We have been assured that it is proper, responsible and appropriate to get on with a whole pattern of preparation even though the visit won’t be officially confirmed for some time.”

Archbishop Vincent Nichols: “The bishops expressed their continued anxiety about the Equality Bill that is presently in its parliamentary process. Three particular anxieties: Scope of the exception for employment for purposes of religion. This Bill actually gives a qualifying definition of what it means to be employed for the purposes of religion and the qualifying definition in our view is too narrowly drawn; it is limited to liturgy or the explaining or expounding of doctrine, so it leaves out of its scope those who would properly exercise a pastoral role as their job and those who would exercise representative roles as their job. Previously there has been no qualifying definition of employment for purposes of religion and this we think is not just to us, but to all the faiths, a difficult section of the Bill. Public Sector Equality Duty – bodies in the public sector, there is often a clash of rights and the Bill gives no hint as to how these clash of rights could be resolved. In fact it seems to be handing it over to guidance by the Equality and Human Rights Commission and we don’t think that is a good way of fashioning legislation that is going to operate in a fair and open manner. The way in which harassment clauses are phrased; they are a bit vague, they are left to a judgement about what is reasonable.”

Note: * taken from the Conference Resolutions 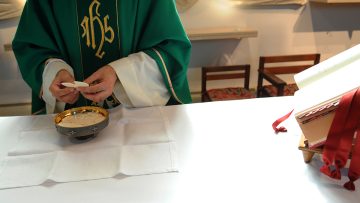