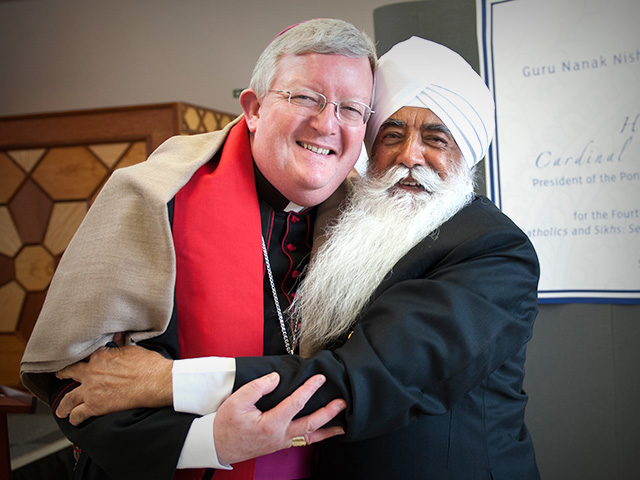 CBCEW » News and Media » » Archbishop of Birmingham visits the...

The Archbishop of Birmingham, the Most Reverend Bernard Longley is visiting Amritsar this week, 21-28 October, at the invitation of Bhai Sahib Dr Mohinder Singh Ahluwalia – the spiritual leader of one of the largest Sikh communities in Birmingham.

He’s travelling together with representatives from the Birmingham Faith Leaders Group – a group which consists of Christians, Jews, Muslims, Hindus, Sikhs and Buddhists created in the wake of 9/11 to discuss issues of common concern to all faiths.

In a video interview, recorded just before the trip, the Archbishop said that “he was very excited” to be going to this part of India, the Punjab, for the first time.

He hopes that local dialogue and cooperation will be enhanced by the visit:

“The visit to Amritsar, as well as being a fascinating experience, will also be another step in strengthening the bonds that are there across the faith communities of our city, through the Faith Leaders Group. I am certain that I’ll come back with a better understanding of the culture, the background and the experiences of very significant faith groups within the city of Birmingham and will understand my own role within the city and our Catholic community better.”

You can watch the video interview with Archbishop Longley in our ‘Latest Videos’ section:

The video has also been uploaded to YouTube and Vimeo.

Well, I must say I am very excited to be going for the first time to this part of India – Punjab to Amritsar. I am going with the invitation of the Birmingham Faith Leaders Group and in fact our group which was established in the wake of 9/11 as a response to the needs within the city of Birmingham, first came together to see what we could share among the faith communities of the city but also attempting to work together for the good of the city, for the common good.

So the group consists of Christians, Jews, Muslims, Hindus, Sikhs and Buddhists and we meet every other month and we have been doing now for more than 10 years – 12 years. In fact Cardinal Vincent was one of the founding members of the group.

At the invitation of Bhai Sahib Dr Mohinder Singh Ahluwalia who is the spiritual leader of one of the largest Sikh communities in Birmingham, we are going to go together to spend a week in Amritsar. Obviously, to visit the ‘Golden Temple’, to learn something about the background, the culture and the religious faith and the work of Sikhs around their own temple in Amritsar but also to learn something about interreligious friendships, dialogue and work in Punjab.

So, I am delighted that we’re going to be meeting with the representatives of other faith communities and I’ve been in contact with the Roman Catholic Bishop of Jalandhar, one of whose priests actually works in the Midlands – Fr. George Wirerack and we’ll be coming together to discuss what our experience of interreligious dialogue and friendship is, in the Midlands of England and to see what there is in Punjab.

The Catholic Church and the Sikh community in the UK

Here in the UK, I think that they very much depend on local relationships and friendships because unlike the Christian churches, the Sikh communities don’t have an over-arching structure or framework for dialogue so very much depend upon getting to know people in the local places. That being said, I have found that the attitude of Sikhs and their Sikh spiritual leadership has been enormously, very open indeed to coming together. They welcome dialogue; they welcome joint witness whenever it is possible; they welcome joint teaching on the values that we share.

Indeed in terms of Sikh Roman Catholic dialogue the community in Birmingham, under its leadership of Bhai Sahib, has been instrumental in strengthening links between the Sikh community and the Holy See. In fact, they welcomed the visit of Cardinal Tauran to Birmingham for a formal Catholic – Sikh dialogue last year.

What do you admire about the Sikh Community?

I think certainly, the very accepting and gentle approach of the Sikhs that I’ve met; their tremendous commitment also to serve others. They are well known for their hospitality, not only to friends but they have an open house in the Gurdwara’s across the city and this particular community on the Soho Road, not very far from our Cathedral- St. Chad’s- feeds 10,000 people weekly. They take their part also in providing food for the homeless within the city alongside other faith groups, night-by-night, in the city centre. But there is also their acceptance, I think, within their own religious ideals; they encourage others to deepen their faith within their own religious groups. I know that the Sikh friends that I have want me to be a good Catholic, to be a better Christian and they encourage that in one another. That appeals certainly.

Always, we share with one another the grief and the sadness that surround the individuals and their families and did in this case. But also together we have been looking at some of the deeper issues, some of the issues, that surround migration and we can learn a lot from the Sikh community. Particularly at home in Birmingham, they are aware of the individual experiences, the families who have migrated to the UK and some of the challenges that do face the people here. So the tragedy of that kind, with an individual family is felt widely within the Sikh community and we shared that with them.

Archbishop Longley’s hopes for the visit to Amritsar, India

I hope that the visit to Amritsar, as well as being a fascinating experience, will also be another step in strengthening the bonds that are there across the faith communities of our city, through the Faith Leaders Group. I am certain that I’ll come back with a better understanding of the culture, the background and the experiences of very significant faith groups within the city of Birmingham and will understand my own role within the city and our Catholic community better.