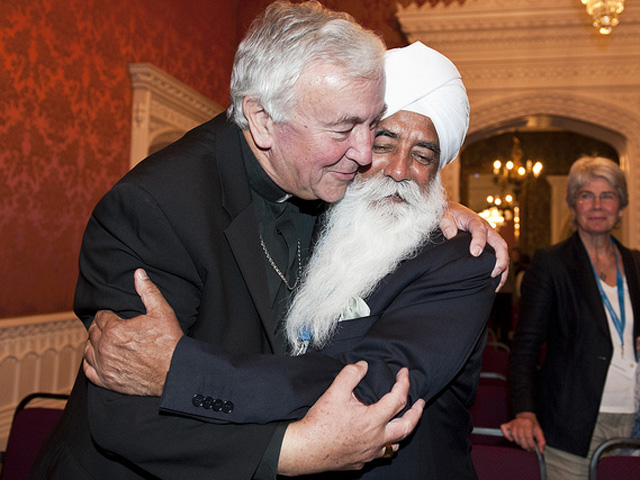 On Sunday 20 November, the focus will fall on interreligious dialogue as a National Inter Faith Week in England, Northern Ireland and Wales gets underway.

A rich calendar of events – including talks, meals and lectures – will help make the week truly memorable with many a chance for communities to learn about and from each other. Watford, for example, plays host to an Interfaith Pilgrimage in which participants will walk to five venues in the town including Holy Rood Catholic Church, the Watford and District Synagogue, and the Cambridge Road Mosque.

Many Catholics will take part in the week in a range of different ways, by attending or playing host to one of the various events.

Archbishop Kevin McDonald believes Inter Faith Week “is an opportunity to take some kind of initiative in the area of relations with people of other religions”.

“This year it falls in the same year that Pope Benedict has convened another Assisi Day of Prayer for Peace,” he says. “This event marked the 25th anniversary of the first Day for Peace convened by Pope John Paul in 1986. The relationship between interreligious work and the quest for peace in the world does provide us with a real focus for our work. Meeting God in Friend and Stranger [the bishops’ teaching document on interreligious dialogue] continues to offer us ideas and encouragement for taking this vital agenda forward.”

The involvement of Catholics in Inter Faith Week, will illustrate the words of Pope Benedict XVI at his recent Day of Prayer for Peace at Assisi: “We are animated by the common desire to be ‘pilgrims of truth, pilgrims of peace’.” His Holiness expressed similar sentiments during his September 2010 visit to Great Britain, when addressing representatives of other religions: “Catholics, both in Britain and throughout the world, will continue to work to build bridges of friendship to other religions.” Inter Faith Week is an excellent opportunity to do so, and to remember the importance of these bridges throughout the year.

Inter Faith Week was established in England, Wales and Northern Ireland in 2009. The aims of the Week are: Strengthening good inter faith relations at all levels; increasing awareness of the faith communities in the UK, celebrating and building on the contribution which their members make to their neighbourhoods and to wider society; and increasing understanding between people of religious and non-religious beliefs.

Pope Benedict’s Assisi Address
The full text of the Pope’s address at the Day of Prayer for Peace in Assisi can is available from Vatican.va